It’s interesting, and perhaps fitting, that while my recent 8 Things I Don’t Need to Hear From Straight People article was making its way around my friend network and the internet in general, one particular straight guy was reacting really poorly to being called out on his straight privilege and hurtful words. His behavior stood in stark contrast to my good friend Carson, who IMed me to say “I really liked your post re unintended counter-productive things that straight people say.” That can be every straight person’s reaction if you’ll choose it.

With Carson, and my countless other fierce straight, cisgender friends in mind, I made a list of awesome things straight folks can do.

Watch queer movies & tv shows, go to queer clubs, do queer things
One of my roommates in college (who is a straight frat guy) saw me watching an episode of Queer As Folk in our living room one day and joined me. It was a really small gesture and it’s stuck with me to today. It’s also great when straight folks have watched queer movies on their own. My straight friends also make it a point to come to parties, even those with mostly queer folks; go with me to queer bars (how often do queers go to straight bars?!), and attend other events such as Pride or even gay running group.

Get upset over injustice directed toward LGBT people (without having to ask)
On multiple occasions I’ve heard my roommates start yelling at their computers from their bedrooms only to realize they’ve just read news about some anti-gay or anti-trans initiative. They speak up at the schools where they teach and in the offices where they work. They educate their friends and they leave comments on blogs and news articles.

Get educated
Read books, magazines, blogs, articles, and scholarly research. Watch TV shows and movies and interviews on YouTube. Participate in discussions and attend conferences. There are all sorts of ways for straight folks to get educated. Talking with queer folks (who make themselves available for that) can be part of the process and also make sure to do some heavy lifting yourself. 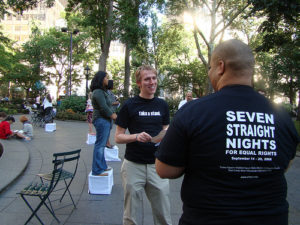 Many of my friends participated in Seven Straight Nights for Equal Rights in New York City to literally take a stand for equality. Other friends find their own ways to take a stand. One of my favorite memories is Sean Fish calling me, out of breath, from campus, “There is a guy here with an awful anti-gay sign. Don’t worry, we are making our own signs to block his out!” They take stands always and immediately when I ask them and find opportunities to take a stand on their own.

Apologize & Adjust
You’re going to do something wrong. Even my fiercest straight friends do or say things that hurt sometimes. They continue to be fierce in their reactions to their own mistakes. They apologize, but not profusely. They don’t require that I comfort them and make them feel OK despite their error. They don’t use their previous history of awesomeness to excuse it. They apologize quickly and sincerely and correct the behavior for the future. It might feel difficult in the moment, but it’s actually quite simple.

Micah & I are preparing a training for the board of a non-profit on gender and trans issues. We open with

If you can do that, you’ll be golden. And you’ll do something that one day will end up on someone’s blog post of favorite memories from straight people.

If you’re digging this article, you want to check out the Tough Questions on the Road to Affirmation series (in progress right now). Subscribe to catch ’em all.